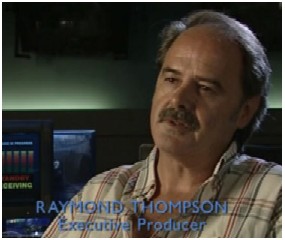 Raymond Thompson is a screenwriter, composer and producer, who currently resides in New Zealand.

Mr. Thompson was born in Redditch, Worcestershire and grew up in Ontario, after his parents emigrated to Canada. He studied Drama at York University and embarked upon a successful career in the music industry as both a songwriter and musician. His groups include Stillwater, and one evolved into Edison Lighthouse, who had the No. one record "Love Grows Were My Rosemary Goes".

Raymond is a veteran of the television and film industries, where he began as a writer. His first novel, The Number To Call Is… was a bestseller and achieved critical acclaim in 1979.

As lead writer/script consultant he has worked on several motion pictures and television series. His credits range from Hotshot to Squadron, Trainer to the icon series Howards Way, which is regarded by many as one of Brtain's best loved drama series (and which regularly achieved the highest ratings during its six-year run).

From 1989-1994 Raymond was also Head of Development for BBC Television Drama, where he had a production/creative liaison on a wide range of successful BBC titles - many of which are still being broadcast today.

In 1994 Raymond founded the Cloud 9 Screen Entertainment Group - which has since specialized in family entertainment - in association with the Sanctuary Group PLC.

The company trades through offices in London, Wellington (New Zealand), and has expanded into the Australian market. Southern Star currently distribute the substantial back catalogoe. Since 1994, Thompson has produced several television series and movies, including The Enid Blyton Adventure Series, The Enid Blyton Secret Series, The Adventures Of Swiss Family Robinson (starring Richard Thomas), Return To Treasure Island, The Legend Of William Tell (created by Thompson), William Shatner's A Twist In The Tale (also created by Thompson). Other series Thompson created include Atlantis High, Revelations, and The New Tomorrow. Perhaps his best known creation was the teen drama/sci-fi hybrid The Tribe, which has become a cult classic around the world and ran for five years with almost three hundred episodes being produced.

In 2001, he returned to his music roots and composed the soundtracks of Cloud 9's portfolio, as well as the Spirit Symphony, which was partly inspired by Asperger syndrome. It was performed by the New Zealand Symphony Orchestra and released on CD in 2004. The proceeds of the song 'With You Every Step of the Way' ( also composed by Raymond) were donated to the foundation.

In 2002 Raymond was honoured (along with Ray Bradbury) for the cult series, The Tribe, at the Dragoncon Festival in Atlanta, Georgia.

In recognition of Raymond's achievements, he was appointed by Her Majesty Queen Elizabeth II as a member of the New Zealand Order of Merit in the 2003 Honours List in recognition of his services to television and entertainment.

Raymond has adjudicated at many festivals including BAFTA and was a member of the jury for the 2004 Emmy finalists.

In 2005, Raymond acquired Tirohana Estate (www.tirohanaestate.com) to pursue his hobby and love of premium wine and is a regular visitor to Martinborough in New Zealand where he participates in each vintage.

Thompson is currently focusing on his screenwriting activities and is developing a portfolio of motion pictures which he hopes to produce.

Retrieved from "https://thetribe.fandom.com/wiki/Raymond_Thompson?oldid=9781"
Community content is available under CC-BY-SA unless otherwise noted.