"Power and Chaos!"
―The Locos' slogan

The Locos, alternatively the Locusts, were the city's most feared and dangerous tribe. Founded and led by Zoot, they ruled the city through fear and intimidation, with a philosophy of creating "Power and Chaos."

The tribe would patrol the streets in a police car with sirens, capturing kids and strays for slavery. They had a rivalry with the Demon Dogz over control of the city.

"You've seen it out there. The only people that are gonna survive are the strong."
―Zoot to Bray

The Locos followed the ideology defined by their leader Zoot. Their goal was to seize power through creating chaos, as captured in their slogan "Power and Chaos." Zoot had ambitions to build an empire and eventually take over the world.

In the struggle for survival and battle for food and resources following the virus, the Locos believed in the survival of the fittest and took what they needed for themselves, putting their own self-interest and survival before the needs of others. They rejected conventional ideas of human rights and morality, using violence, force and exercise of power as a means to their ends.

When the virus struck, Martin saw that everything would change and established himself as the "new order". He placed the blame for the destruction of the world on the "corrupt" adults.[1] This continued with the Locos as a persisting disdain for the "old ways" of the adults before the virus. Zoot believed that history was dead and wanted to rid his new world of the old ideas. This was reflected by the symbolic burning of books, during which Zoot said: "No more schools, no more teachers, no more books." Their police car was a symbol of the de-establishment of the former authorities.

Zoot was the undisputed leader and supreme ruler above everyone else in the tribe. They did not have democracy or voting, but Zoot's word and orders were law. There was no room for discussion or debate, and disobedience or objections were met with severe punishment. Ebony was Zoot's woman and lieutenant,[2] though it was uncertain to what extent the others would obey her.

The Locos sought to rule the city, and eventually the world, and to build an empire. They had a fierce rivalry with the Demon Dogz, who were considered their main competition. With their main base at the rail yards, and later the Horton Bailey Hotel, the Locos ruled several sectors in the city.

The Locos mainly used their police car with sirens to patrol the streets, with Ebony and Zoot standing in the windshield while members of the tribe surrounded and followed the car on roller-blades. They had regular patrols on their territory, and anyone found within would be chased out or seized. They used to have raids in other parts of the city, to grab good and food or to attack other tribes.

People who were captured by the Locos would usually be used as their slaves. Some, for example Glen, were slowly integrated into the tribe and taught their ways. They also dealt in slave trade with other tribes, such as the Nomads.

The Locos were renowned for their break-dancing, as they displayed at the Tribal Gathering, where T-Bird went up against Tai-San in the final round.

The Locos had arranged a meeting with Lex to decide whether he, Ryan, Zandra and Glen could join their tribe. Zoot demanded their food and asked why they wanted to join the Locos. Lex was lost for words, and read “Locos are scandalous” out loud from a nearby train. The Locos chased after the group and were able to capture Glen, and later fell into a battle with their rivaling tribe the Demon Dogz.[3]

The Locusts resided in the heart of the City, in the Horton Bailey Hotel. It was from here that they held their base. Zoot also possessed a police car, which would sound whenever the Locos were 'patrolling' the streets. They also had secret supplies of gasoline and a bus, which Ebony used to help the Mallrats escape the city in S1.

Ebony, Java and Siva were Locusts, however, Ebony made sure that both her sisters were kicked out, ensuring that they did not take the power that she craved. With Zoot's death, Ebony took control of the Locos and became their Queen, however after showing weakness towards the Mallrats and the impending threat of the new virus, the Tribe disbanded and Ebony joined the Mallrats.

Members of the Locos reappeared to aid Ebony as the Militia, to guard Tai-San and the antidote when the virus returned. Some also re-appeared as The Chosen having followed The Guardian when the Locusts disbanded.

The Locos wear a red, flame-like scrawl of facepaint as their sole distinct symbol. They also are identifiable by the baseball gear that they wear as well as the inline rollerblades which they use when running alongside Zoot's police car.

The names Locos and Locusts were used interchangeably by the tribe themselves and others. Zoot (then Martin) probably took the name Locusts from a school lesson about the insects of the same name. Loco is a Spanish word meaning crazy, meaning the Locos call themselves "the crazies."

Add a photo to this gallery 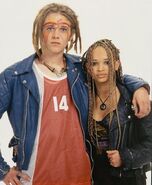 Add a photo to this gallery

Retrieved from "https://thetribe.fandom.com/wiki/Locos?oldid=13744"
Community content is available under CC-BY-SA unless otherwise noted.